How it works: server hardware

About servers. Everyone reading this post is making a connection to a server. In fact, you are making a connection to at least a couple. There is a server in your office or home that is allowing you to proxy onto the internet, most likely a wireless router, which connects through another server, the DSL or cable modem. There is a caching DNS resolver server on your ISP. An entire army of router servers between your home and our data center. And the last server in the chain is our web server, which actually hosts this content.

Lets narrow down the definition of a Server. We are not going to talk about IBM mainframes or Sun UltraSPARC based blade systems. Today, we care only about the servers which comprise the majority of the infrastructure of the websites you visit. These are normal computers just like you have in your house or office, with the exception of being confined into more efficient packaging. They use familiar Intel or AMD processors, normal DDR2 or faster RAM, and SATA hard drives. What really separates them from home PC’s is the software. But software is not what this blog is about.

Here is what one of our older servers looks like (below): 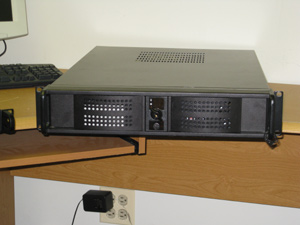 To compare, here is one of eBoundHost’s newest servers.Â  This form factor is unofficially called the ‘pizza box’ due to its small dimensions. 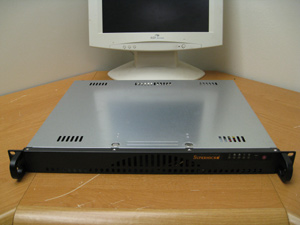 The first thing you will notice is that the new server is not as tall. Our older hardware uses 2u (units of space) while the new servers use 1u. This allows for greater density. Some servers use as much as 7u but these are specialty machines that are filled to the brim with hard drives in gigantic RAID arrays.

Side to side comparison: 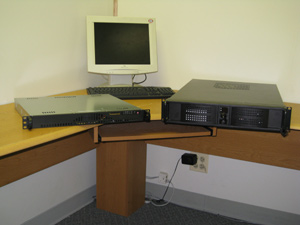 These servers fit into specialty (read expensive) racks that have 42u of storage in each rack. This means that when filled with 2u servers, we can only install 21 machines instead of 42 1u servers. It’s a dramatic difference when you talk about a server room full of racks such as in our facility: 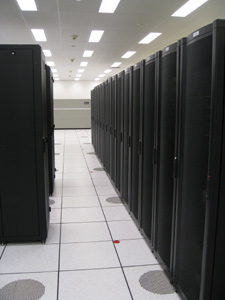 Of course the entire 42 units are not available for servers, there are switches, power distribution units, firewalls, intrusion detection equipment.Â  All considered, we are happy to have 30 servers in one rack.

There is also the consideration of electricity and heat. A rack full of servers eats electricity like a hungry SUV, and produces just as much heat pollution. 30 servers stacked on top of each other, blowing air into the same direction, require an amazing amount of cooling, which needs big air conditioners that move a lot of tonnes of air. That’s all I’m going to say about that. Data center challenges is going to be saved for another blog entry.

To jump back into server hardware. Here is the same 1u server without its cover. 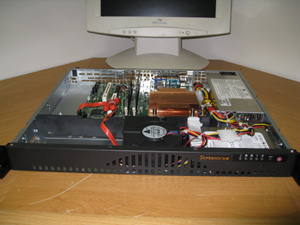 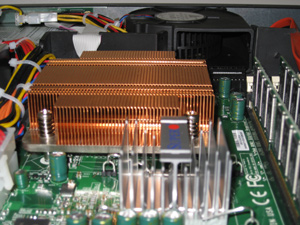 Every server is custom built. When an older machine comes off line, we generally sell it through eBay and build a new server to take its place. The nature of hardware is such that components wear out and fail eventually. Our clients and our reputation are far too important, so we give old hardware the boot and use all new equipment.

Here are some servers in action. The following pictures may not be completely safe for geeks, they may cause weakening of the knees and a desire to run out and fix something. Please refrain, it will pass:

These (above) are dedicated servers. Inventory tags have been obfuscated in order to protect the innocent.

(below) Are some specialty machines which have 15k SAS (fast/expensive) hot swappable hard drives in RAID array. Used for our shared servers, VPS machines, and some powerful dedicated servers.

Each server is built by our staff. We love them so much that we have hundreds of them 😉

More to follow, there is so much to cover: data center, operating systems, server software.

Great customer service. After looking around for a while we signed up with eBoundHost. And I can assure you that we made right decision. Customer service is so good that I don't have words to explain. I would recommend this service to everyone.

From using your hosting services for dozens of web clients and appreciating your wonderful customer service (all the while enjoying spending my meaty affiliate checks), I look forward to growing with you and watching you evolve surely and steadily into a powerhouse of a force to be reckoned with for your competitors. In an overcrowded abyss of hosting providers it is an absolute MUST to stand out above the crowd if you want to claim your stake and play with the big boys. Period. All I can say is this...Look Out World - GAME ON!!!

1) Their technical support people are always available to help with questions. 2)Server and network speed excellent. 3)Everything works great. 4)I highly recommend them!!!Thank you.

I have worked with many hosting companies over the course of my years in the website building and design business. I can say with certainty that eBoundHost.com is among the elite companies. I would and have recommended them to anyone.

Over the years, I've dealt with many companies. None come close to equaling the service and price offered by eBoundHost.

Reliability and customer service that is rare and refreshing. We have been using eBoundHost for several years and unlike many companies who's service wanes over the years, the staff at eBound has consistently delivered top notch performance. Bravo!

Fast, reliable, full of features... Over the years, I have used more than a dozen hosts, both the big ones and smaller ones; eBoundHost.com is by far my favorite.

I'm Stan Bogdashin, a customer of your hosting company for the past 2 years. Our company provides web design, development and Search Engine Optimization (SEO) services. Want to thank you for helping us by providing great hosting seamless support - this is why I continue to recommend you and don't use anyone else for hosting!

I waited to write a review until I had absolutely everything working, thinking that something would come up that eboundhost couldn't solve almost immediately. I've never been so happy to be wrong - their customer support is just incredible.

eBoundHost provides the very best service I've experienced in hosting. It takes less than 24h to get an answer to any question. They're great.