At 12:04 pm CST (GMT -6), one of the major ISPs in the USA, Comcast, experienced “an external network issue” that caused a portion of the Internet to become inaccessible to users.  Comcast has such a wide reach that both individuals and businesses were impacted.  To those affected, it seemed that some websites went off-the-air and simply did not respond.

Comcast announced that issues were resolved at 4:34 pm CST. 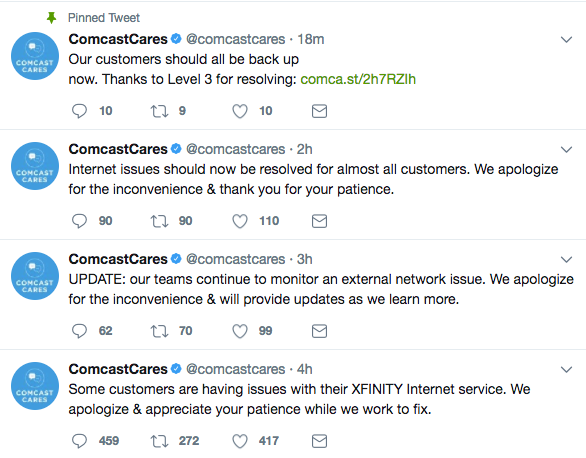 Check http://downdetector.com/status/comcast-xfinity/map/ for comments from those impacted.

I came to eBoundHost after a very bad experience with a so called "big boy" - you know one of those places you are only a number. I have been a satisfied customer for more than 4 years now. The support is second to none.

Fast, reliable, full of features... Over the years, I have used more than a dozen hosts, both the big ones and smaller ones; eBoundHost.com is by far my favorite.

I'm Stan Bogdashin, a customer of your hosting company for the past 2 years. Our company provides web design, development and Search Engine Optimization (SEO) services. Want to thank you for helping us by providing great hosting seamless support - this is why I continue to recommend you and don't use anyone else for hosting!

There is not a place on this Planet that you can get better service, support or hosting!

No better web host on the market! Support is second to none.

EXCELLENT across the board, super quick reply to questions (about 15-30min). Outstanding! Loads of features, excellent price! Loads of space and bandwidth!

Every time I call with a problem or question, Everyone, especially Denis has always stepped up to the occasion. As usual he solved yet another problem I had. You have a superlative customer service. It doesn't get any better. Keep it up guys.

Over the years, I've dealt with many companies. None come close to equaling the service and price offered by eBoundHost.

I have worked with many hosting companies over the course of my years in the website building and design business. I can say with certainty that eBoundHost.com is among the elite companies. I would and have recommended them to anyone.

Great customer service. After looking around for a while we signed up with eBoundHost. And I can assure you that we made right decision. Customer service is so good that I don't have words to explain. I would recommend this service to everyone.